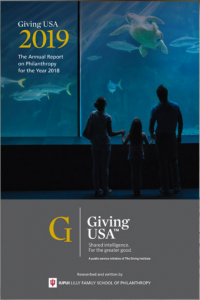 Alford Group celebrated 40 years of impact with Giving USA events across the country, including in Chicago, Seattle, Tacoma and Vancouver, WA.

Thank you to everyone who joined us for  presentations sharing the recently released Giving USA 2019 Report on Philanthropy for the Year 2018. There is a lot to consider in reviewing Giving USA 2019’s report, so let’s dive in and discuss some key takeaways.

Total charitable giving reached $427.71 billion in 2018, an increase of $2.97 billion in current dollars over 2017. However, when adjusted for inflation, giving saw a decline of 1.7%. Total giving was essentially flat and growth did not keep pace with inflation but keep in mind that even with a statistically flat year, charitable giving reached its second highest level ever after 2017’s record-breaking increase.

This time last year, there were a lot of questions left on the table after the release of the 2017 giving data:

If you are reading this, you made it through 2018 (well done!) and we now know a bit more about several factors that impacted giving.

Last year, we saw the Tax Cuts and Jobs Act go into effect. Though it will likely take several years of data to understand the true effect this tax law has on giving, it is worth understanding a few crucial elements from the most impactful tax law changes in decades.

For most households, the standard deduction increased eliminating the ability to deduct contributions for those who previously itemized their returns. In addition, the maximum charitable deduction increased incentivizing high-net worth donors to increase giving, and state and local tax cuts were capped. If, like me, you would enjoy learning more about TCJA, and specifically more about SALT (State and Local Tax) deductions, read this testimony report by the Tax Foundation.

Of course, economic performance and disposable personal income (income left after taxes are paid) directly correlate to giving. Despite the economic uncertainty caused by significant changes in public policy, GDP increased 5.2% and disposable personal income increased by 5% in 2018. This is great news. However, stock market volatility at the end of 2018 occurred when many households typically make decisions about giving.

Adjusted for inflation, the S&P 500 decreased 8.5% in 2018, with stock market performance decreasing 13.97% in Q4 alone. T. Rowe Price reported this drop to be the worst in almost a decade, and highlighted multiple reasons for investor “discontent” during this time: threat of increasing interest rates by the Federal Reserve, higher bond yields threatening corporate borrowing costs, a potential rise in producer price inflation, joblessness, poor retail sales data during the holiday season, rising mortgage rates (oh my gosh, okay I will stop here, but the report is telling).

We will look more closely at giving by recipient as well as giving by sources, but just considering the above factors you might anticipate that some sources increased their giving and giving from others may have decreased. What was also true is that – as a result of the above factors – different sectors experienced lower contribution levels, while others grew rapidly.

Hug Break! Need a little moment of validation? Me too. Total giving represented 2.1% of GDP in 2018 (a level sustained for the past six years). Thanks to the collective efforts of you and everyone in the social sector, philanthropy has yielded a huge boost to the economy, and represents a higher portion of GDP than utilities; mining; and the agriculture, forestry, fishing and hunting sector.

Both the International Affairs and Environment/Animals sectors saw increases. Both sectors have been responsive and innovative in their fundraising platforms coupled with increased outreach and awareness of important world-wide issues – immigration and refugee crises, hunger, climate change, extinction – to name a few. 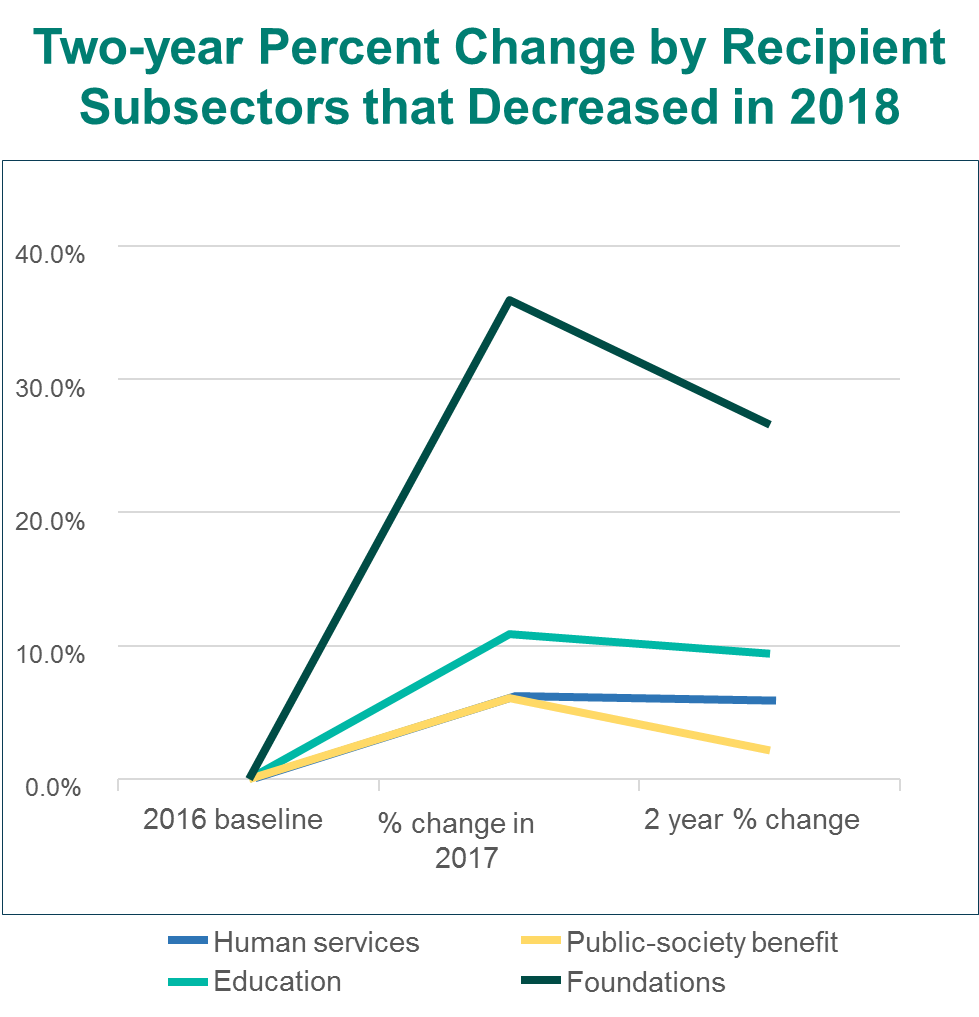 Furthermore, when you look specifically at two-year percent change by giving to the recipient subsectors Education, Foundations and Public-Society Benefit, 2018 reflects a return to a normal amount of growth year to year in comparison to each sector’s significant growth spike in 2017. This feels much more tenable than simply observing a striking reduction in giving between 2017 and 2018.

Giving by individuals declined (by 1.1% in current dollars, by 3.4% when adjusted for inflation) and giving by individuals represents less than 70% of total giving for the first time since 1954. Still, individual giving totaled more than $292 billion. Mega gifts, or gifts by individuals that require an adjustment to the econometric estimate, were valued at $250 million or more in 2018 and represented $4.8 billion in giving (an increase over 2017’s $4.1 billion).

Notable mega gifts were made by Jeff and MacKenzie Bezos ($2 billion), Michael Bloomberg ($1.8 billion), Pierre and Pam Omidyar ($392 million), Stephen Schwarzman ($295 million) and Steve and Connie Ballmer ($295 million). Mega gifts typically have been able to make up for any decline in household giving, but not this year – even though mega gifts increased in 2018 and with the mega rich ultimately benefiting from the Tax Cuts Job Act.

Let’s tie this to another data set, the Fundraising Effectiveness Project analyzed the fundraising results of 4,500 nonprofits at the end of 2018 and reported a 1.6% increase in giving by individuals (up from 2017). But the increase was driven by donations over $1,000. The report notes that smaller gifts and donor retention rates both fell: Gifts in the $250 – $999 range declined 4%, while gifts of under $250 dropped by 4.4%. What these figures illuminate is a gap in giving from mid-range donors that accounts for a large enough portion of the total giving pie that even last year’s increase in giving by high-net worth individuals was not enough to keep total individual giving from decreasing.

This indicates a concerning trend and is worth monitoring and more discussion. In the meantime, let us summarize by saying that individual giving was impacted year over year, but marginally. High-net worth individuals continue to drive philanthropy and may be even more incentivized to give thanks to the TCJA and positive economic indicators – but we cannot rely on them to hold the sector and need to be innovative and thoughtful in how we sustain giving from mid-level donors.

In 2018, giving by family foundations totaled $34.57 billion, representing 64% of giving by independent foundations and 45.6% of total foundation giving (down slightly from 47.4% in 2017). It is hard to discern if money that donors would typically put aside for grant-making is truly on the decline or if it’s going into donor-advised funds for distribution later. Continued increases in giving to community foundations  (again 10.2% in 2018, and 11% in 2017) suggest that donor-advised funds certainly drive growth.

Charitable giving by bequest remained virtually unchanged in current dollars between 2017 and 2018 totaling $39.71 billion. When coupled with individual giving, family foundations and DAFs, the share of giving propelled by individuals grows to 85.7%.

Adjusted for inflation, charitable giving by corporations (cash, in-kind and grants and gifts made by corporate foundations) increased 2.9% over 2017, totaling $20.05 billion in 2018. Changes in corporate giving closely follow corporate pre-tax profits, and some companies are choosing to invest their increased assets as a result of the tax cut back to charitable organizations. Two large scale examples of this were recently announced. . In November 2018, AbbVie awarded $55 million to three nonprofits working to address the achievement gap among underserved children – Chicago Public Schools, City Year and University of Chicago Education Lab (to expand a partnership with Chicago Public Schools. Similarly, Boeing announced  that their corporate giving would exceed $230 million to support 443 nonprofit organizations in 47 countries, bolstered by $55 million in new grants and an increase in their company matching gift program.

The future of philanthropy

There is a lot to discuss around what this data means and a lot of conversation around what nonprofits can and should be doing. Stay tuned for more on what this and other research tells us about trends and the value of diversity, transparency and partnership.

We recently asked a number of our clients and friends for their take on the future of philanthropy. Watch this video to hear what they all had to say!