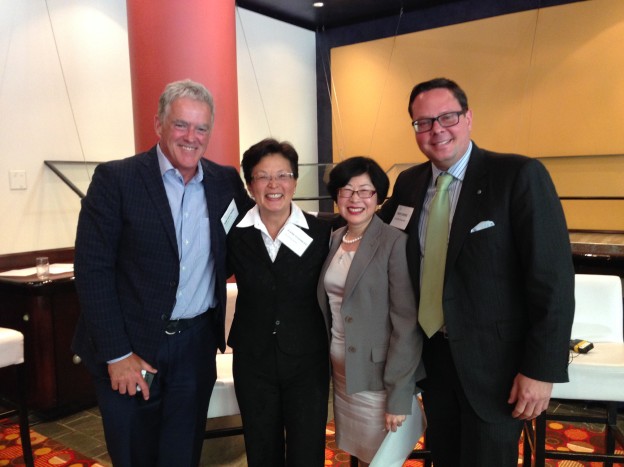 As one of the most ethnically diverse cities in North America, Vancouver, BC was the perfect setting for the 2014 Giving Institute Summer Symposium. Though I may be biased, I thought one of the highlights of the four-day Symposium was a panel discussion on fundraising in the Asian community. While the topic is vast – the Asian community encompasses more than 40 different ethnic groups – panelists shared their experience working with the Chinese community, both in Vancouver and in mainland China. I had the honor of moderating the session, which opened with a challenge by Dr. Tom Matthews, Head of School at St. George’s School in Vancouver, to a common perception about Asian donors:

“There’s often an underlying premise among mainstream fundraisers that ‘they’ (meaning ethnically diverse donors) don’t understand American-style philanthropy and thus are not good prospects. This sweeping generalization, if taken at face value, can result in many missed opportunities.”

Matthews recounted a number of first-hand experiences in Vancouver and mainland China with philanthropists who responded generously to a range of opportunities and were motivated by a range of factors. While the following list is not intended to be comprehensive, it illustrates the breadth of Matthews’ experience:

When asked to cite cultural differences between Asian and mainstream donors, Candice Tsang, Vice President, Major Gifts & Gift and Estate Planning at Vancouver General Hospital and University of British Columbia Hospital Foundation, and raised in Hong Kong, stressed that “people are people, more similar than different.” With all major donors, she continued, it is vitally important to demonstrate respect, particularly to the decision maker. The decision maker can vary from one Asian ethnic group to another and from one generation to another. “Assumptions are very risky,” she added. “Always try to involve both husband and wife in cultivation and solicitation, even if one person appears to be more actively engaged with the organization. Respect – or perceived lack of respect – can be particularly critical for fundraisers to understand as they work with donors from Asian communities.”

Erik Dierks, VP for Development, Vancouver Cancer Foundation, underscored the pitfalls of generalizations. One Board member from the Asian community cannot speak for 30-40 different ethnic groups, and will struggle if put in that position. “If Vancouver is a census metropolitan area comprised of more than half “visible minority” residents, what are the implications and opportunities for the composition of our Boards of Directors? The more diverse the representation on the Board, the more networks you can access, and that is true for both the Asian and the broader community.”

Each panelist attempted to distill his/her experience into one final golden nugget of advice:

Dr. Matthews: When working with donors from different cultures, and particularly when working overseas, always use an intermediary to open the door, serve as a language interpreter if needed, and help to navigate the cultural nuances. As “insiders” familiar with the organization and the case for support, Board members are particularly well suited for this role.

Ms. Tsang: Remember that people are people and the most important recipe for success is to build and nurture genuine relationships with donors. In some cases it takes a period of years before you see significant results, but in other cases you might be surprised how quickly the donor can make a decision about a major or capital gift.

Mr. Dierks: It may sound overly simplistic, but don’t forget to ask! I’ve seen organizations go to great lengths to research and develop a “Chinese strategy,” an “Indo Canadian strategy,” and others. But there is a tendency to get caught in “analysis paralysis” and never actually get around to the solicitation. That in turn perpetuates the myth that “they” don’t understand (North) American philanthropy!

Panelists and audience members alike noted that growing ethnic diversity is a reality for both Canadian and American communities. Those who commit to learn and act upon the changing landscape today will be in the best position for future fundraising success.