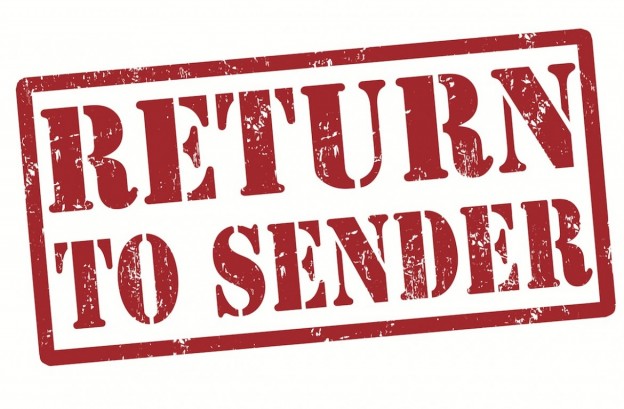 So what can your nonprofit take from this story? To start, it is important to identify under what circumstance you should return a major gift or donation. Listed below are five situations that might cause you to consider returning to sender.

Reputation is a principal factor in the continuity of any nonprofit organization; it is what attracts donors, clients, and other constituents and keeps them coming back as committed and highly valued donors. We know all too well that a good reputation can take years to build and maintain, yet slip away in just a moment. If accepting a potential donor’s donation could jeopardize your organization’s reputation, carefully consider otherwise. An example may include a gift from a well-known but controversial individual who wants to be recognized for their contribution. If their association with your organization would cause more backlash than benefit, consider asking the donor for an anonymous donation or declining the gift all together.

As a nonprofit, participating in any unlawful activities will likely be detrimental to your organization. Therefore, keeping in mind that not all giving is altruistic or ethical, it is important to examine the intentions of potential donors. For instance, in the case that a public figure makes a donation then later expects that employees of your nonprofit vote for them as a candidate in an upcoming election, it would be best for your organization to not accept or possibly return the gift.

Once major gifts are accepted by an organization, by law nonprofits are contractually obligated to deliver the goods and/or services described in the solicitation or as specified by donors. An example may include a donor’s requirement that your organization must increase services by a significant percentage within the next year. Determine in advance if that expectation is achievable. If the target is not realistic, then request the donor consider and agree to the program strategy and results your organization anticipates. However, should unforeseen circumstances beyond the control of your organization result in lower than anticipated outcomes, such as a reduction in the number of individuals applying for internships, disclose the results as soon as possible. Disclosing the situation to the donor and sharing the plan going forward allows the donor to determine and acknowledge that a good faith effort was made to achieve the desired outcomes as a result of the philanthropic investment. It will also show that the organization has adapted to a changed program environment to achieve the greatest results in that investment.

“Only when a brand defines itself and its core values can it identify causes or social responsibility initiatives that are parallel with its own brand story.”

The Girl Scouts of Western Washington, having just recently released a statement of the national organization’s stance of supporting all girls, had not yet had a chance to make their own stance known.

This was that chance.

And what a statement!

The Girl Scouts of Western Washington used the opportunity to communicate clearly that they support transgender girls and will not accept mandates from donors to the contrary. Additionally, they used the opportunity to connect with donors who do share the same values, expressing a need for increased donor engagement and contributions, both immediately and in the longer-term.

What to do now

Your organization can leverage these types of challenging opportunities to communicate your brand, values, success stories, mission and more, and connect with people and potential donors who see your vision and align with your organization’s values. Taking notes from the Girl Scouts, this isn’t a time to shame a donor or dwell on what you don’t want; nor is it a time to publicize every gift you feel compelled to return. Rather it is a time to celebrate your organizational vision and what you do want for your constituents and community.

In what other situations would you recommend returning or declining a major donation? Have you experienced this situation before? Weigh in by leaving a comment here or on LinkedIn.