Donor-advised funds, or DAFs, have been at the top of mind for many people since the release of the Giving USA report for philanthropy for the year 2020 (check out our blog here for an overview) and especially now with Giving USA’s groundbreaking report on DAFs which was released on November 11, 2021. DAFs have also received extra attention this year due to the bills that have been introduced in the U.S. Senate that aim to place new restrictions on DAFs. However, for many, there is a real lack of clarity around the current status of DAFs, and they raise more questions than answers.

For development professionals who oversee fundraising for their organization, the question is how to engage DAF-holders. Given the stunning growth in DAFs over the past five years, there are no signs of their popularity slowing down, so let’s unpack and demystify this hot trend. What are the rules around DAFs? What are the benefits of a DAF? How can your organization gain access to them?

What are DAFs? Why are they so popular?

The National Philanthropic Trust defines donor-advised funds as a philanthropic giving vehicle administered by a charitable sponsor that allows donors to establish and fund the DAF account by making irrevocable, tax-deductible contributions to the charitable sponsor. Donors can then recommend grants from those funds to other charitable organizations. What makes DAFs so popular, and the fastest-growing form of philanthropy, is that they are so easy and flexible to set up.

More and more DAFs have low or no minimum account thresholds. Companies like Fidelity and Schwab now require no initial contributions for opening a DAF account. There is also no time limit, meaning that there is no rule that requires the money be donated to a charity within a specific amount of time.

No doubt that is why the number of individual DAF accounts continues to rise year over year and why they now total over one million. DAFs can be found at major fund companies, universities, community foundations and as employer-sponsored DAF accounts. 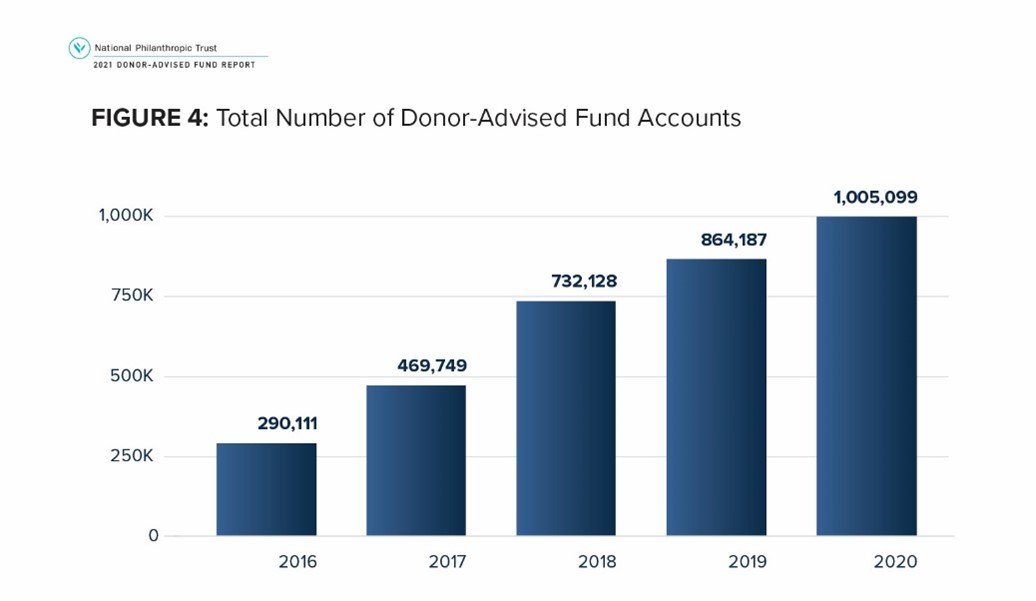 Here are some statistics that speak to the growing power of DAFs: 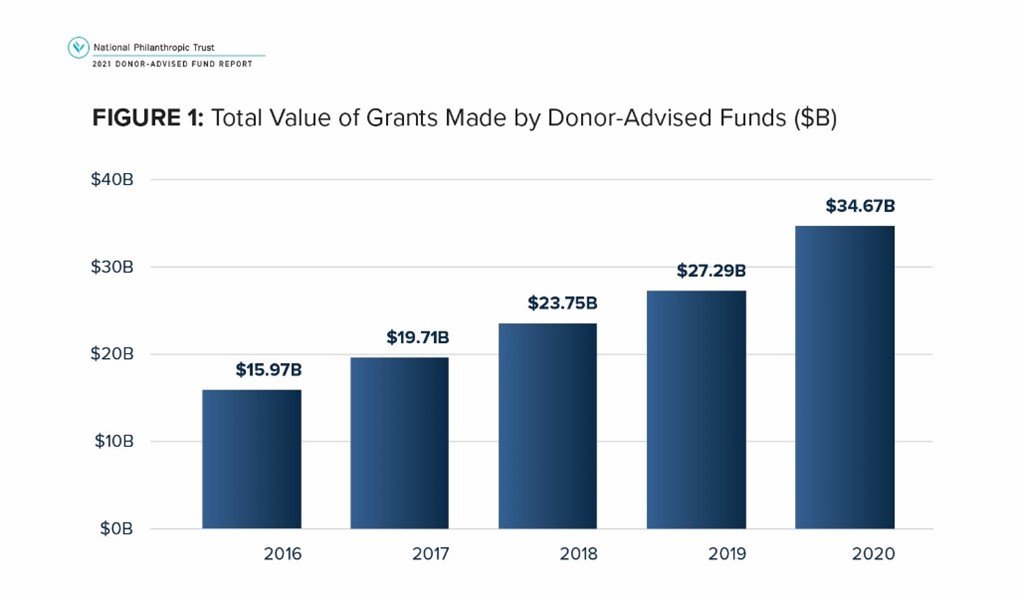 What is the outlook for DAFs?

In all likelihood, DAFs will continue to grow in the coming years. With emerging models such as employer-sponsored DAF accounts that offer payroll deductions for charitable giving gaining traction, there are no signs of this trend slowing down. In addition, Fidelity and Schwab now offer no minimum requirements for opening DAFs which means they are removing barriers to access. As of 2020, the average size of DAF accounts is estimated to be $159,019, which is a 5.5% decrease compared to the previous year. It is likely that the average DAF account size will continue to decrease in the years to come as minimum requirements are removed for opening a DAF account.

Who is on the receiving end of DAF grants? The Giving USA Special Report found that education, religious and public-society benefit organizations attracted the most dollars. The study also found that giving to human services grew by 138% and giving to racial justice organizations more than quadrupled.

It remains to be seen how the current bills making their way through the U.S. Senate change or tighten restrictions for DAFs. To critics of DAFs, the issue is that there are no financial incentives to quickly donate the money, which means the money can end up sitting in accounts rather than being distributed to nonprofits and communities.

The Accelerating Charitable Efforts Act, proposed by Senators Angus King and Charles Grassley, would create new deadlines for funders to spend money held in DAFs and thus eliminate the possibility of the money simply sitting in accounts for years. If passed, these new restrictions and payout rules would have significant consequences for community and private foundations, along with hospitals, universities and large charities.

What does this mean for your organization/nonprofit?

With this substantial growth in DAFs, it comes as no surprise that development professionals who are responsible for increasing their organization’s fundraising results always want to know, “How can my organization engage potential donors who have donor advised funds?”

Though the answer is not easy, here are a couple of tips for nonprofits:

All in all, it looks like DAFs will be around for the foreseeable future, so it is important to have a solid understanding of what they are and what they could mean for your organization.