On Wednesday, June 17, Alford Group’s Karen Rotko-Wynn, Executive Vice President, shared highlights, trends and key takeaways from Giving USA 2020: The Annual Report on Philanthropy in 2019. Karen’s full presentation, along with a panel discussion with national experts and funders discussing the next normal and the future of philanthropy may be found here.

To be at this moment – mid-June 2020, reflecting on last year’s philanthropy during these challenging and volatile times – well, it feels a bit disconnected. It is hard not to ask why these data points matter; it is difficult to receive this report without wondering what this year’s annual report on philanthropy will say.

However, as the longest running, most comprehensive and most authoritative report on charitable giving in the United States – representing 128 million households, 600,000 nonprofits and 80,000 foundations and businesses – the information reported through Giving USA is deeply relevant. As leaders and staff of nonprofits, it is important to understand data trends and to know where to focus efforts; it is important to know where your organization fits within this data; and it is important to understand this data in relation to navigating our current, very difficult year.

In 2019, giving in the U.S. reached almost $450 billion in philanthropy, representing a 4.2% increase in current dollars and a 2.4% inflation adjusted increase over 2018. This incredible news follows two strong years. As you can see, 2017-2019 represent three consecutive years of increased giving overall with philanthropy crossing the threshold of $400 billion each of the three years. 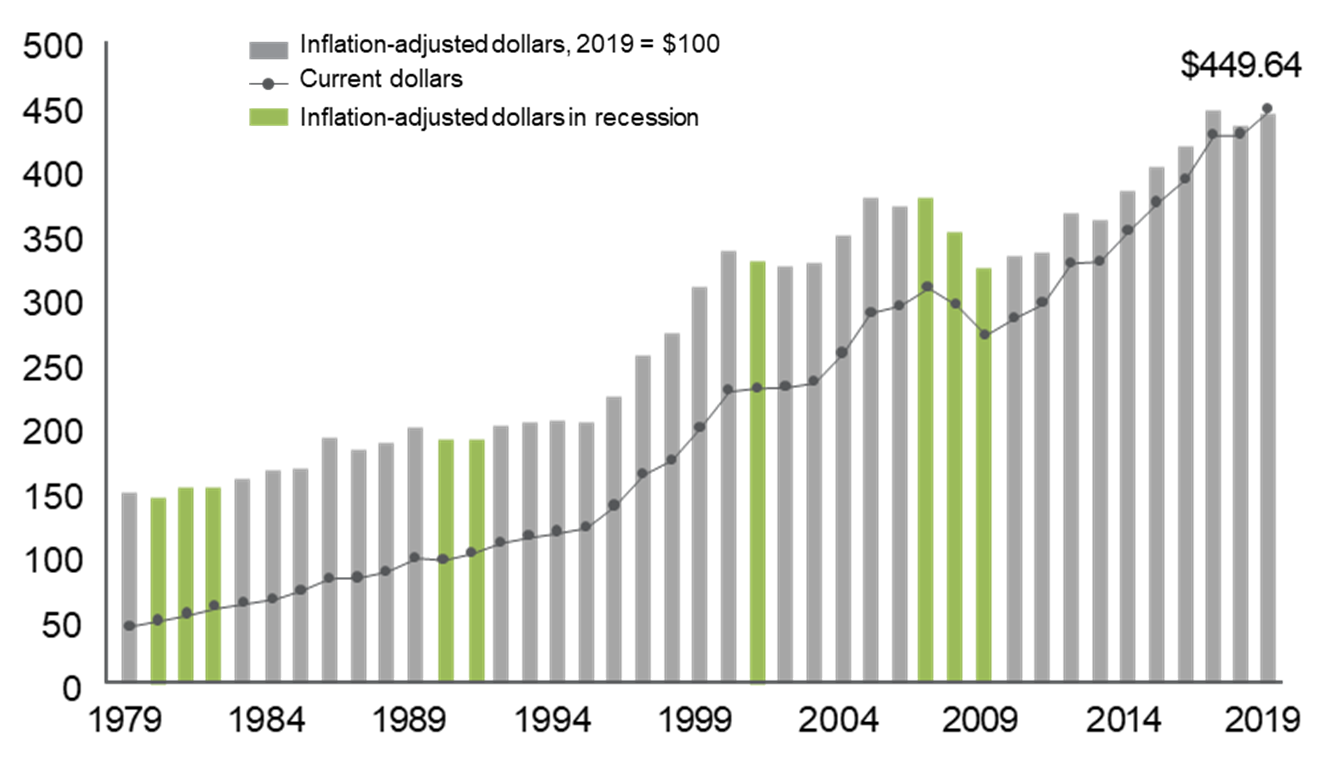 Looking at total overall giving between 1979 and 2019, the average year-to-year change in giving is an increase of $10.16 billion (making the current-dollar change in total giving  between 2018 and 2019 larger than the 40-year average).

Giving responds to economic indicators and provides the context behind philanthropy.

Understanding how giving trends historically changed during recession years was an important component to giving projections at the end of 2019 as a fear of a recession loomed. Most recently, the Great Recession, which ended in 2009, resulted in a slight drop in total overall giving, but this did not mirror the significant drop of the stock market during that time. In fact, following the end of the Great Recession, the total growth in inflation-adjusted giving increased 33 percent between 2010 and 2019.

Research has found a statistically significant correlation between changes in total giving and values on the S&P. Because stock market values are an indicator of financial and economic security, households and corporations are more likely to give when the stock market is up. Case in point, between 2018 and 2019, the S&P 500 Index grew 26.6% in inflation-adjusted dollars.

Another key economic factor related to how much donors give to charity each year is Gross Domestic Product (GDP). GDP is the market value of all goods and services produced within a country’s borders during a specific time period and is one of the most important factors in measuring the status of a nation’s economic health. Between 2018-2019, GDP increased by 2.3% in inflation-adjusted dollars. Total giving as a percentage of GDP in both 2018 and 2019 remained flat at 2.1%. 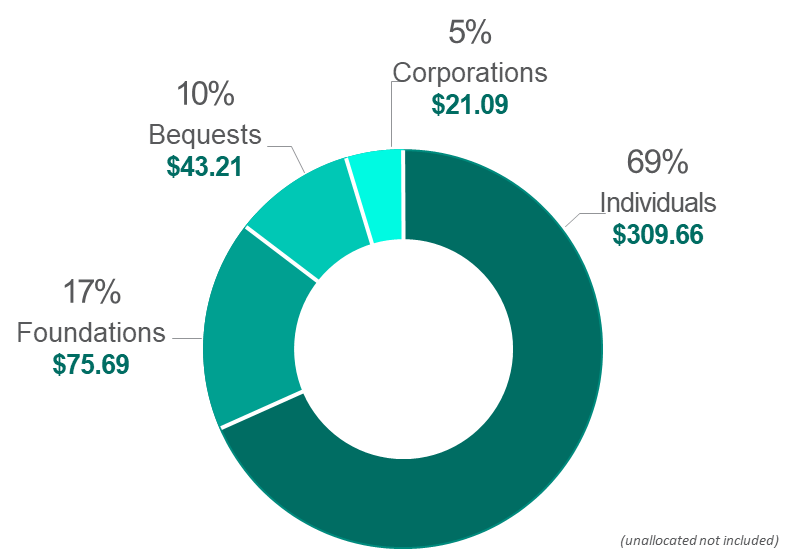 All giving sources by dollars in 2019 are at an all-time or second all-time high. As a percentage of total giving, individual giving increased from 68% to 69%, corporate giving remained steady at 5%, giving by bequest increased slightly now at 10% (compared to 9% in 2018) and giving by foundations decreased to 17% (from 18% of total giving in 2018).

Estimated charitable giving by individuals (and households) was $309.66 billion in 2019, a 2.8% increase from 2018 in inflation-adjusted dollars. Very large “mega-gifts,” or gifts by individuals that require an adjustment to the econometric estimate (in other words, more than $300 million), totaled an estimated $6.57 billion in 2019 up from $4.8 billion in 2018.

With aging donors and strong demonstration of support across each level of estate valuation (most especially estates with assets below $1 million), building relationships through a planned giving program is more important than ever.

Despite giving by corporations increasing, as a percentage of total giving it has remained flat. Giving USA continues to look at this trend. Various factors may relate to an increase in gift-in-kind commitments, as well as corporate foundations adopting increasingly strategic approaches leveraging corporate philanthropy as well as marketing budgets and cause marketing – the latter of which are not counted in Giving USA’s source of giving analysis. 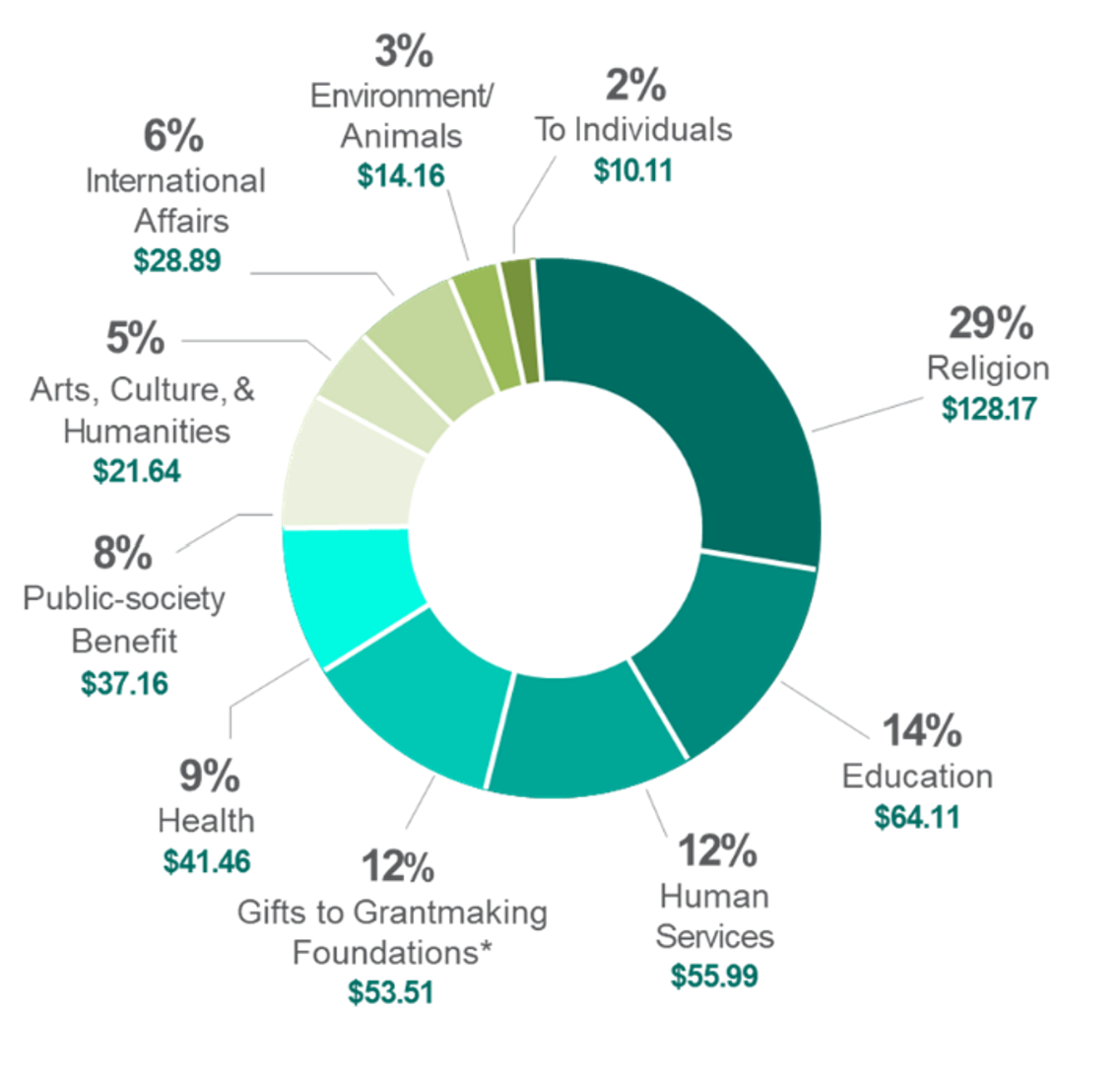 In 2019, the top four subsectors as recipients of contributions were Religion, Education, Human Services and Gifts to Grantmaking Foundations (including independent, operating and community foundations) – all representing percentages of total giving by recipient that were flat compared to 2018.

Cumulative giving over two-year period to demonstrate how the trends of the subsector have remained steady. Arts, Culture and Humanities, Environment/Animals and Education each saw two years of consecutive growth. One contributing factor is that high-net worth individuals rank these three subsectors as priority funding areas and they tend to give at higher rates to these subsectors during years experiencing strong stock market performance.

As we consider these data points and examine our nonprofit organizations through the lens of both the historical trends and context of our current realities, it is important to understand how this data can inform your planning. For the past four months, fundraisers have been rapidly pivoting to respond to the current environment, as have our donors. 2020 will be defined by social crises, racial and economic injustices, pandemic response, politics – that feels like more than enough– but historically, the data shows us that donors respond in times of need. Across virtual platforms, against difficult organizational decisions, it is important for nonprofits to leverage technology, be innovative and nimble while staying focused on maintaining and building relationships.

Keep your mission in the forefront; be smart and bold – remove roadblocks and question relevancy in order to drive impact and change; be responsive and act quickly.

And stay positive and connected. We are all in this together, and you are making a difference.

Additional resources? COVID-19 Resource Toolkit: Working Toward the Next Normal

For Alford Group’s full presentation, along with a panel discussion with national experts and funders discussing the next normal and the future of philanthropy, click here.

Giving USA: The Annual Report on Philanthropy is the seminal publication reporting on the sources and uses of charitable giving in the United States. The production and release of Giving USA is the result of the collaborative efforts of Giving USA Foundation, a public service initiative of The Giving Institute, and Indiana University Lilly Family School of Philanthropy. Alford Group is a founding member of the Giving Institute and can provide you with a 30% discount on the book and/or materials. Please send me an email for more information.